'Recognizing the need is the primary condition for design.'

Charles Eames
'To design is to communicate clearly by whatever means you can control or master.'
Milton Glaser

Activity 1 - Review the information and presentation below, answer the questions under the presentation 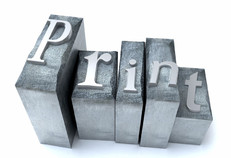 Printing is a process for reproducing text and images, typically with ink on paper using a printing press. It is often carried out as a large-scale industrial process, and is an essential part of publishing and transaction printing.

The earliest form of printing was woodblock printing, with existing examples from China dating to before 220 A.D.[1] and Egypt to the fourth century. Later developments in printing include the movable type, first developed by Bi Sheng in China,[2] and the printing press, a more efficient printing process for western languages with their more limited alphabets, developed by Johannes Gutenberg in the fifteenth century.[3]

Johannes Gutenberg's work on his printing press began in approximately 1436 when he partnered with Andreas Dritzehen – a man he had previously instructed in gem-cutting – and Andreas Heilmann, the owner of a paper mill.[12] It was not until a 1439 lawsuit against Gutenberg that an official record exists; witness testimony discussed type, an inventory of metals (including lead) and his type mold.[1]

The Gutenberg Bible (1455) established the superiority of movable type for western languages, and printing presses rapidly spread across Europe, leading up to the Renaissance, and later all around the world. Today, practically all movable type printing ultimately derives from Gutenberg's innovations to movable type printing, which is often regarded as the most important invention of the second millennium.[2]

Use this website and other sources to research modern print processes.  Suggest a common use for each method of printing.

You are to list the common uses for each process i.e. Flexography is used for: Printing on flexible surfaces such as plastic bags, bottles........etc

Pick two printing processes and write a description of how each process works including an example.

Consider your findings from activity 1&2

Pick one of the graphic products listed below and write a 60 - 120 word statement that states what method of printing you would choose to create the product in school and in industry, explain your choices .

Find a partner in the room that has selected a different graphic product for activity 2.

Review and compare your chosen print process and discuss your choices.

On a piece of paper write your answers to the following questions:

What differences were there in print processes and products chosen?

Why did you choose different processes?

Could you have used another process?